Persons with disabilities: Full admission price with free admission for one attendant

If you want to get a cheaper deal (50% off) for 5 most-visited tourist attractions in Toronto, you should get a CITY PASS!

Open all year round, except Christmas Day.

The entrance is on Bloor Street West (in front of McDonald's)


Return to TORONTO IS COOL homepage. 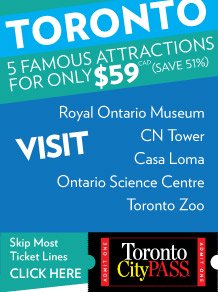